Modern Agent Mastery Reviews – is it a scam? 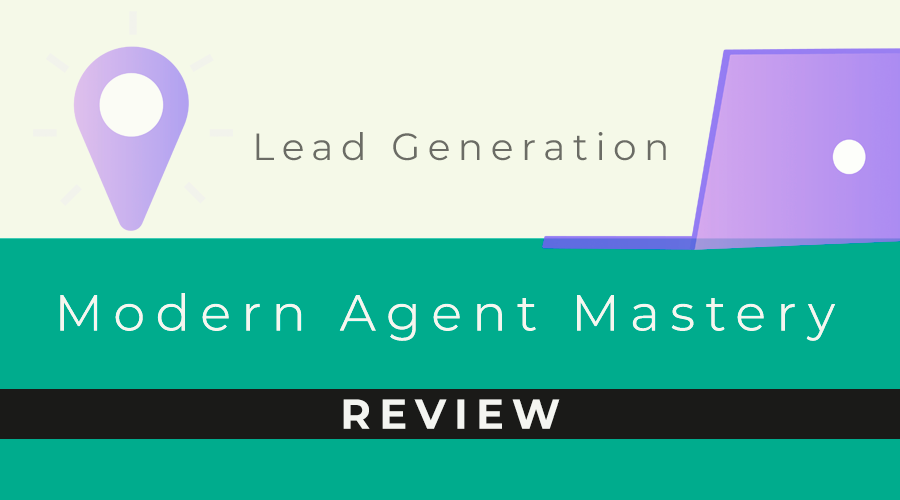 “All our dreams can come true, if we have the courage to pursue them.” – Walt Disney

This Grant Wise Facebook Ads course is for those that are looking to accomplish one of two things:

So in a nutshell, this is all about dominating the real estate realm when it comes to lead generation.

Luckily, you landed on the right Modern Agent Mastery reviews because I’m about to tell you exactly what’s inside the course:

Listen, if you’re looking to generate leads for home sellers then it might be a tough go for you. Not saying that’s the fault of the course it’s just the nature of generating leads as a real estate agent.

The fact of the matter is it’s a heck of a lot easier to generate buyer leads than it is seller leads.

If you’re a marketing company then I think the real value might be to take this information and use it to market for real estate investors. I was a real estate investor before I started my lead generation business and I assure you, those things are worth a pretty penny!

Many Grant Wise reviews you’ll come across will go in depth on the course he offers, however not many will dive into who Grant is.

I don’t know about you but if I’m spending money with something I wanna know exactly what they’re all about and if they can get me to where I wanna go!

So, who is Grant Wise…

He actually began his journey as an entrepreneur at the age of nineteen while he was still in college.

As a matter of face, Grant was a pretty good baseball player in college until injury struck.

Between getting injured and experiencing life in business, he ended up leaving school and hasn’t looked back since.

To make a long story short Grant’s father owned a business in the home improvement space and when his dad came down hurt, Grant stepped in as a fifty percent owner of the company.

After a bit he actually ended up taking over the company. Honestly, the dude would do a ton of golfing and maybe a job or two every weekend.

Eventually Grant ended up getting into the construction business and actually did pretty well. He ended up making $180,000 in a 12 month period at the age of twenty one.

He actually started blowing a lot of money and quickly learned the hard way about investing in himself as a businessperson. Eventually that biz went downhill and he lost it. That was a tough lesson to learn and it could’ve been avoided if he invested in some coaches to help him along the way.

That said, I get it. We all have to learn some way.

Grant got to the point where he was heavily into SMM for agents and he had a considerable amount of success doing so, at least in the early days. Those clients were great at first but obviously it didn’t completely work out because here he is today.

You wouldn’t be reading Grant Wise reviews if it had.

So what did he do next? Well he turned to the coaching and mentorship world. Once he saw a little bit of success showing a few real estate agents how to build up their own business using his marketing techniques, he decided to create a whole program to coach others on how they could do this.

Once his program experienced growth he started contacting other big players in the game like Grant Cardone and my mentor’s (Josh, who teaches people how to generate leads for ANY small business; that’s the route that I went and now do 45k/mo) mentor.

Conclusion and How I Got To Multiple 6 Figures Online

Listen, if real estate is your passion and you truly ENJOY the daily grind of being a successful agent, then this Modern Agent Mastery reviews should’ve provided a glimpse and shown you that it’s a solid way to generate leads and grow your income.

If MAM is the way you decide to go, then get use to spending a lot of money on Facebook Ads. Make sure you’re prepared to spend money daily if you want to generate the leads.

Another thing to mention would be the time that it takes to test and maintain your ad campaigns. Often times these ad campaigns will need to be nurtured daily.

Expect to make sure the ads are performing well and be prepared to make changes immediately if things are off. After all, it is your money you’re flushing down the toilet if something is off.

Now, I did get this course and I was able to pull some things from it but at the end of the day I knew that I wanted to leverage free traffic over paid traffic all day!

That’s why I decided to focus all my attention back on my local lead generation business.

Not only are Facebook Ads just too much for me to deal with, but I was just sick of the expense considering I still had to baby them on top of it.

Plus, it was eating into my profit margins. Idk about you but I wanna keep the money I make. Not pay unnecessary expenses!

I much prefer to build out my digital real estate assets like this one.

Yep, that thing pays me $1k/mo consistently since I built it back in early 2019 and I haven’t touched it since the day I found a business owner to partner with.

On top of that I’m utilizing free traffic which means I get to keep almost all of that money. My expenses for that site are roughly $30 per month. That’s a 97% profit margin!

All mine except for what gets sent to Uncle Sam.

If you’re like me in wanting to keep that money while also making it passively, you can just learn more about the biz here.

I’ve done almost every online business model out there but the local lead gen game just keeps me coming back. It’s my bread and butter!